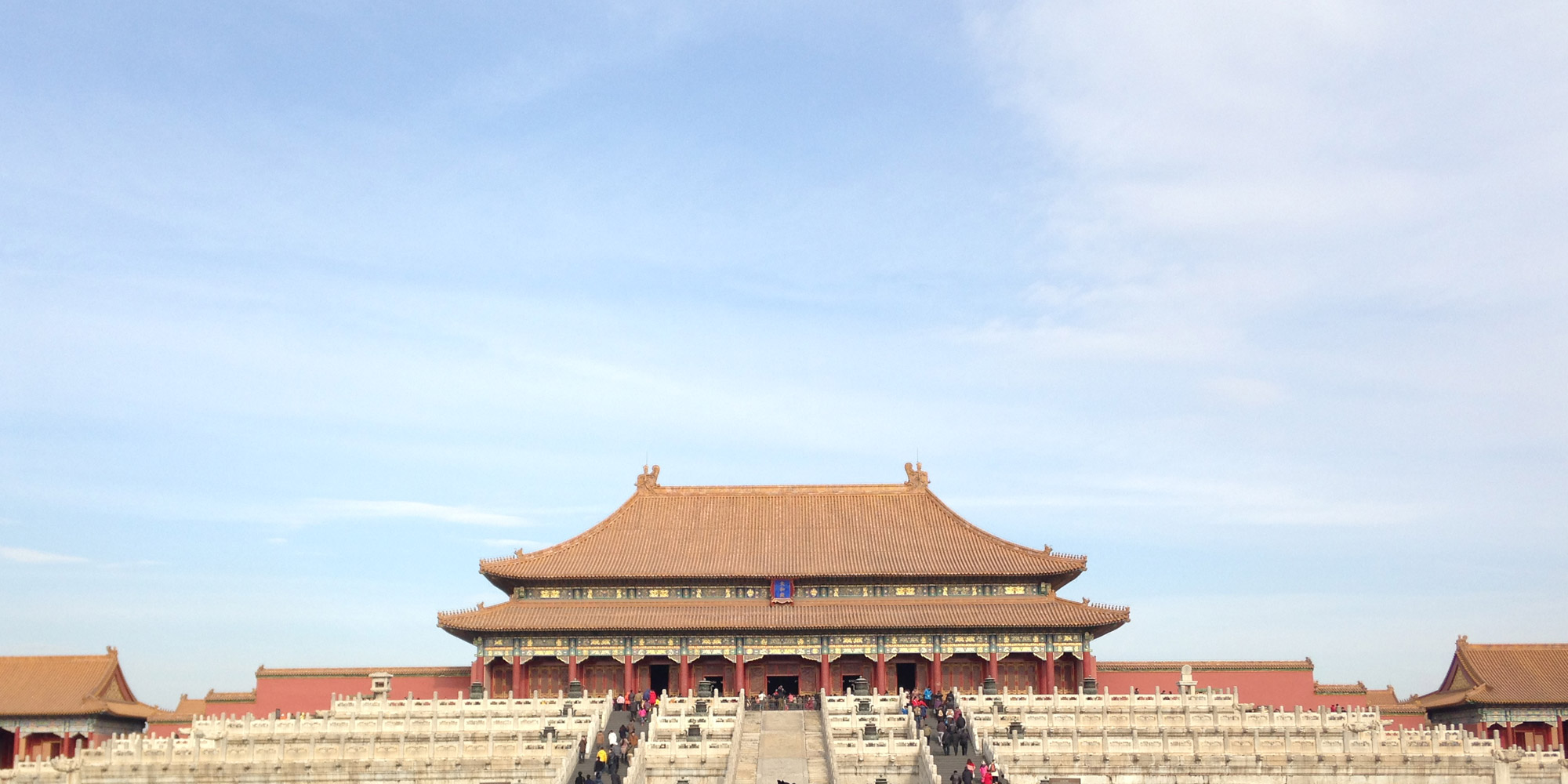 After Hangzhou I headed to Beijing.

I wake up really early, take the metro to the train station (sidenote: This was my first time on the Hangzhou metro, it's super new, there is only one line open so far. But it was weird being on a brand new metro, the think was like spotless and perfect. But weirdly bright for 7am), then wait around for a few hours at the train station (the Hangzhou train station is also brand new and I've since learned quite possibly the biggest train station in Asia. It was soooooooooo big. It took me like 20 minutes to walk from the end of one room to another) then wait when I was on the train, then wait on the Beijing metro. I got to my hotel (It's just some shitty chain, like chinese Days Inn) and wandered around a bit, ate some meat on a stick, and came back and went to bed.

Lots of people told me that Beijing was their least favorite city in China. Maybe it was the fact that I had friends here, but I liked it a lot. Way better than Shanghai in fact (though still not as much as Hangzhou).

I was staying in a hotel, which was nice, having my own room and shower. The hotel was in the hutongs (which I think roughly translates to "alleyways"). A spiderweb of tiny pedestrian streets with lots of snacks and stores and restaurants and people milling about. Basically every vendor had a loudspeaker that is loudly, annoyingly announcing something in Mandarin. Days later Nick made the joke of wanting to smash each of the speakers with a baseball bat. They were the worst.

The snacks were great though. The first night I ate a bunch of various meats on a stick. I later discovered my love of a Beijing snack specialty. There's a small fruit in china that looks kind of like a big cherry called a Hawthorne and tastes kind of like a pear. Commonly you'll see about 10 Hawthornes on a stick, coated in crystallized sugar. I must have eaten like 10 of these sticks while I was in Beijing.

The next day Justin came and met me for Lunch. Justin is a former coworker from GOOD, he's originally from a city called Jillin, which is north of Beijing by a fair bit. He still lives in the US now but he was home for winter break and his girlfriend lives in Beijing (she got surgery while we were there…don't worry, she's totally okay) so he was here too. We ate some chicken wings, which are basically indistinguishable from buffalo wings in the US. Then we braved Beijing traffic to pick up our friends Nick and Mary from the airport.

We brought them back to the hotel and caught up on the way (it was really nice, talking to native English speakers, it had been a few weeks) though I remember having a coughing fit the whole ride back, Beijing Smog I guess. Afterwards we want and met up with Justin's friend (and former boss) for dinner which was absolutely delicious, and she treated us, which was lovely. Actually, every single meal I ate in Beijing was completely delicious.

The next day Justin's girlfriend was getting out of the hospital so he had to go take care of her, so he sent us on a tour, which was great and hilarious. Purportedly the tour was for the Great Wall, but it ended up being so much more (and less) than that.

They took us to the following destinations: A jade factory, the Ming Tombs, The Great Wall, a restaurant, a tea house, the olympic stadium (the birds nest), a silk factory and a pearl factory. It was us 3 plus an Egyptian dude.

First of all, Justin calls me frantically at 7:20 am (he got patched through to my room phone). The tour was supposed to start at 8 but they were arriving to pick us up at 7:30. So I had 10 minutes to wake my ass up and get out there.

The jade factory was hilarious because it's like half privatized, have government run. The first little hallway they present to us like a museum, lots of carvings made out of jade, but the rest of it is just a giant show room with salespeople hounding you to buy stuff made out of jade.

The Ming Tombs were cool but they are basically a smaller, less busy version of the forbidden city. But our tour guide was pretty good so we learned lots of stuff.

The Great Wall was awesome, we hiked all over it and there was like no one there, we spent about 2 hours walking all over it, which was nice, and tiring, which was great because I was plumping up on Beijing food with Justin feeding me. 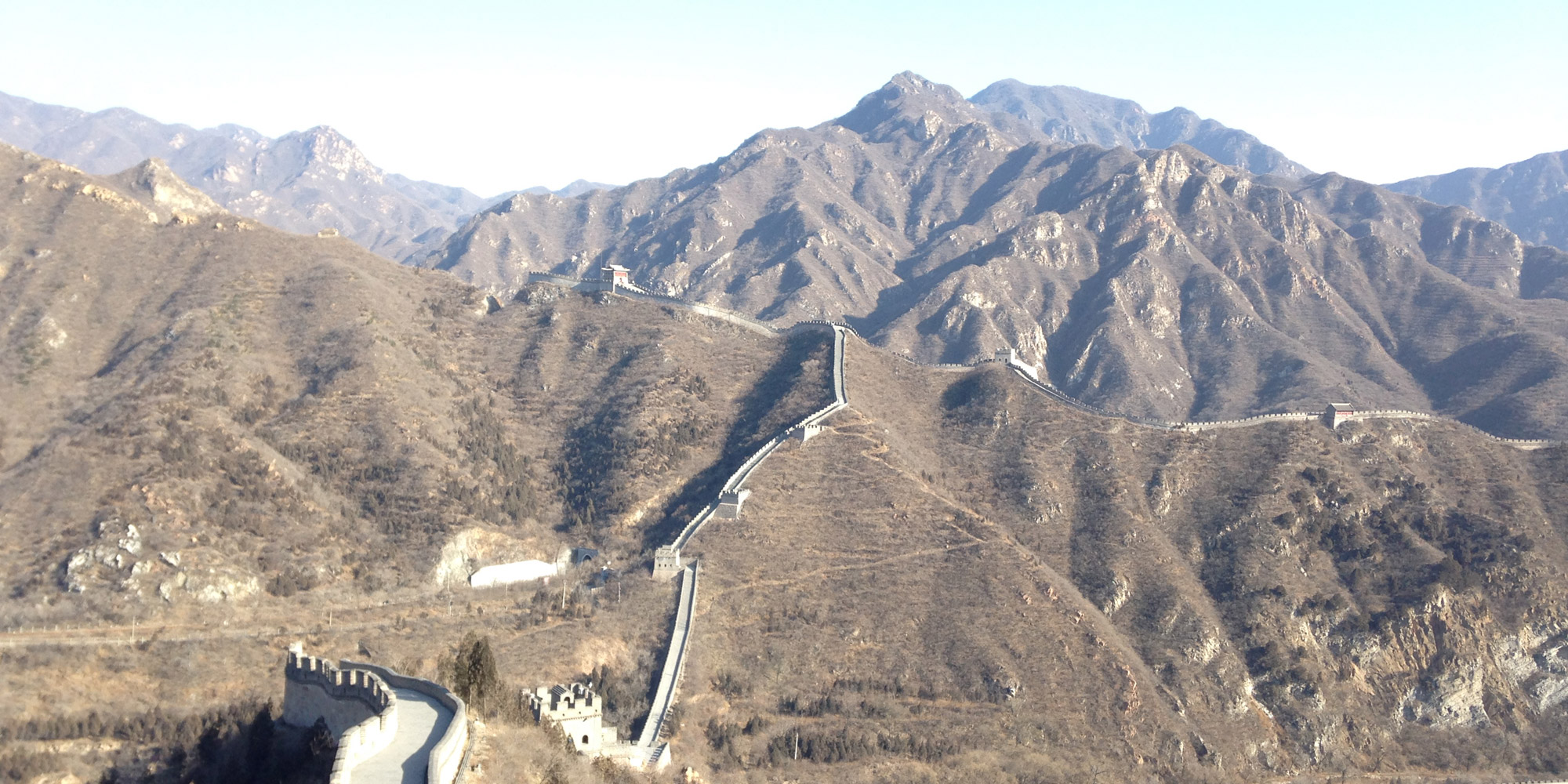 The restaurant was pretty dece too, thought they ordered us food that Americans would like, one of our dishes was Kung Pao chicken (which, granted was a lot better than kung pao in the US).

The tea factory, silk factory and pearl factory were exactly like the jade factory, basically salespeople hounding us to buy stuff. Mary and Nick caved and bought some tea since you know those two are tea fiends. The pearl salesman lady was hilarious because she basically kept making fun of me and Nick…she was like "do you have a girlfriend?" and i was like "uhhh, kind of". "You need to buy her pearls, all girls love pearls", "Uhh, I'm not sure she'd be super into pearls." "YOU GO OVER THERE AND BUY HER PEARLS RIGHT NOW". "NO!". Pearls are dumb.

For the Olympic stadium they literally pulled the van over on the side of the freeway and had us get out and take pictures. Needless to say they didn't turn out very good.

That night justin (and his recovering girlfriend Nicole) took us out to the best Peking duck joint in Beijing. It was totally fancier than anything we has had at that point but oh so worth it, the duck was delicious. You make them into these tiny burrito things with duck meat, some veggies and sweet sauce on a wrap that seemed almost identical to a thin tortilla. We also are some pork belly and frog legs that were also absolutely delicious.

The next say we took an 8 hour high speed train due north (it was only a 5 hour train north from Hangzhou to Beijing, so I want to emphasize we were basically headed to Siberia in January) to a city called Harbin.

Harbin is known for two things, the cold (it was -35deg C) and the ice festival. I had to buy a scarf and mittens and new shoes just for this one day trip, I was utterly unprepared to deal with the levels of cold we were going to experience, and I grew up in Michigan.

Harbin, apart from the cold, was great. I went straight to bed at our hotel when we arrived. The next day we spent the morning walking around the mainstreet, making stops every 20 minutes or so to go in shops and warm up. We stupidly ate some milk ice cream that Harbin is known for, it was absolutely delicious but I'm sure lowered my core body temperature to dangerous levels. We ate some super delicious buns for lunch.

That evening we went to the ice festival, which is almost impossible to describe, that's how awesome it is. I wish I could adequately describe the scale, there are huge, I mean HUGE structures built entirely out of ice, I'm talking like 10 story buildings tall. There's a recreation of a cathedral that you can walk around on, bridges, slides, you name it. At night everything is lit up with some crazy looking colored lights, it's like being in a frozen acid trip. It was great, totally worth the trip way the hell up there (and the sleeper train we took back to Beijing that night…Justin stayed one more night in Harbin the headed back to Jillin). 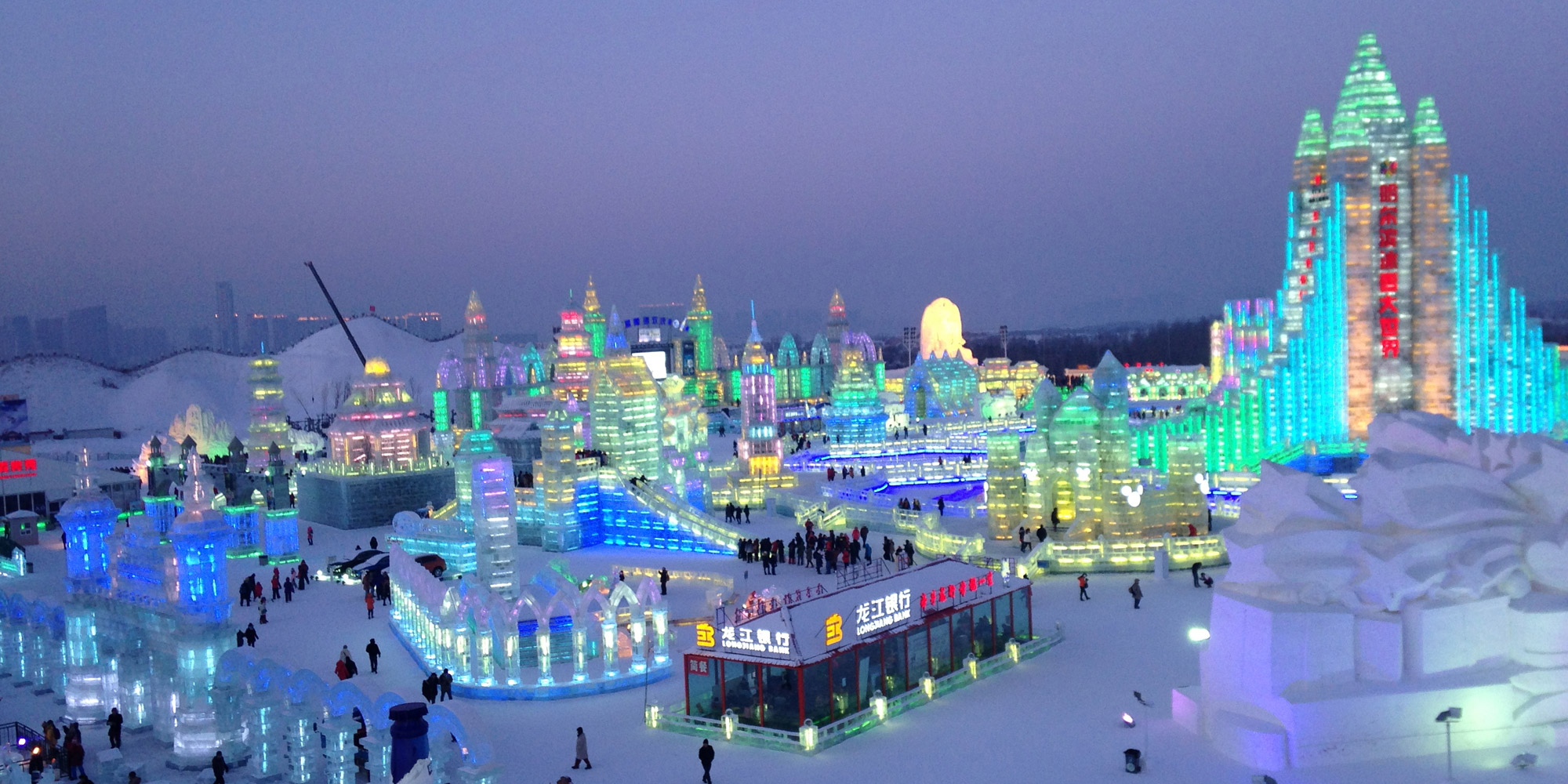 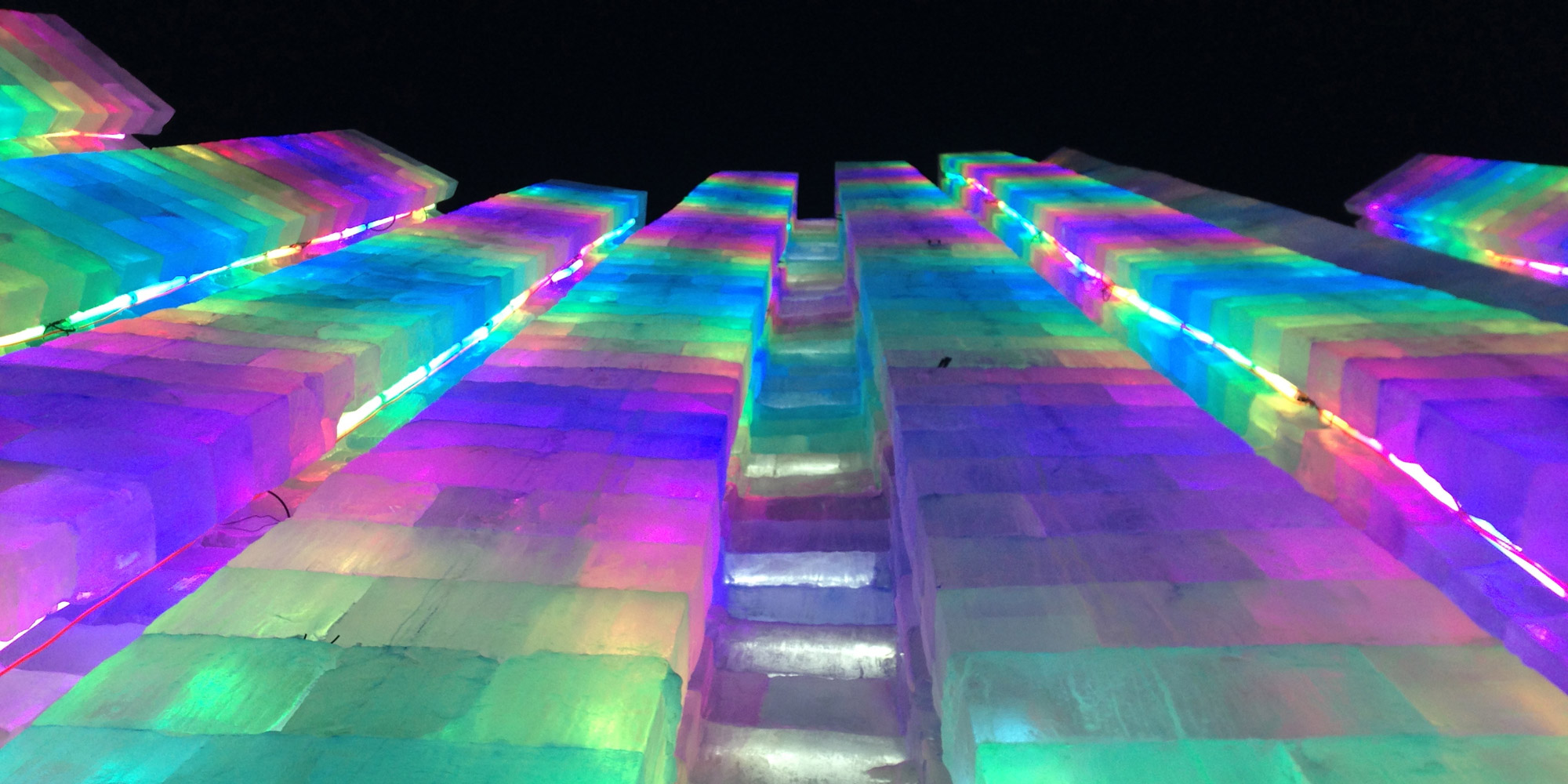 We got back to Beijing the next morning and took a nice long walk to a flea market that took us through a big park and involved lots of delicious rest stops to eat baked goods. The flea market had tons of amazing stuff and made me wish I had an apartment to furnish. Afterwards we headed back to the hotel and took a load off.

That night Nick and I went to a restaurant called Dali near the Hutongs where our old hotel was. It was almost impossible to find, at the end of a totally nondescript alley, but it was amazing. We described it as western aesthetic with eastern food (which is pretty ideal in my mind, as the usual eastern aesthetic so far is either dirty or tacky). There's no menu, you just let them know if you have any dietary restrictions and they start bringing plates out. I particularly liked one that was some kind of mushroom salad. The main was a huge flat fish that was delicious and bony.

The next morning nick and Mary woke up at 4am to catch their flight to India. Mine wasn't until 12:30 but I woke up anyways. Eventually I took the train to the airport and said goodbye to China.