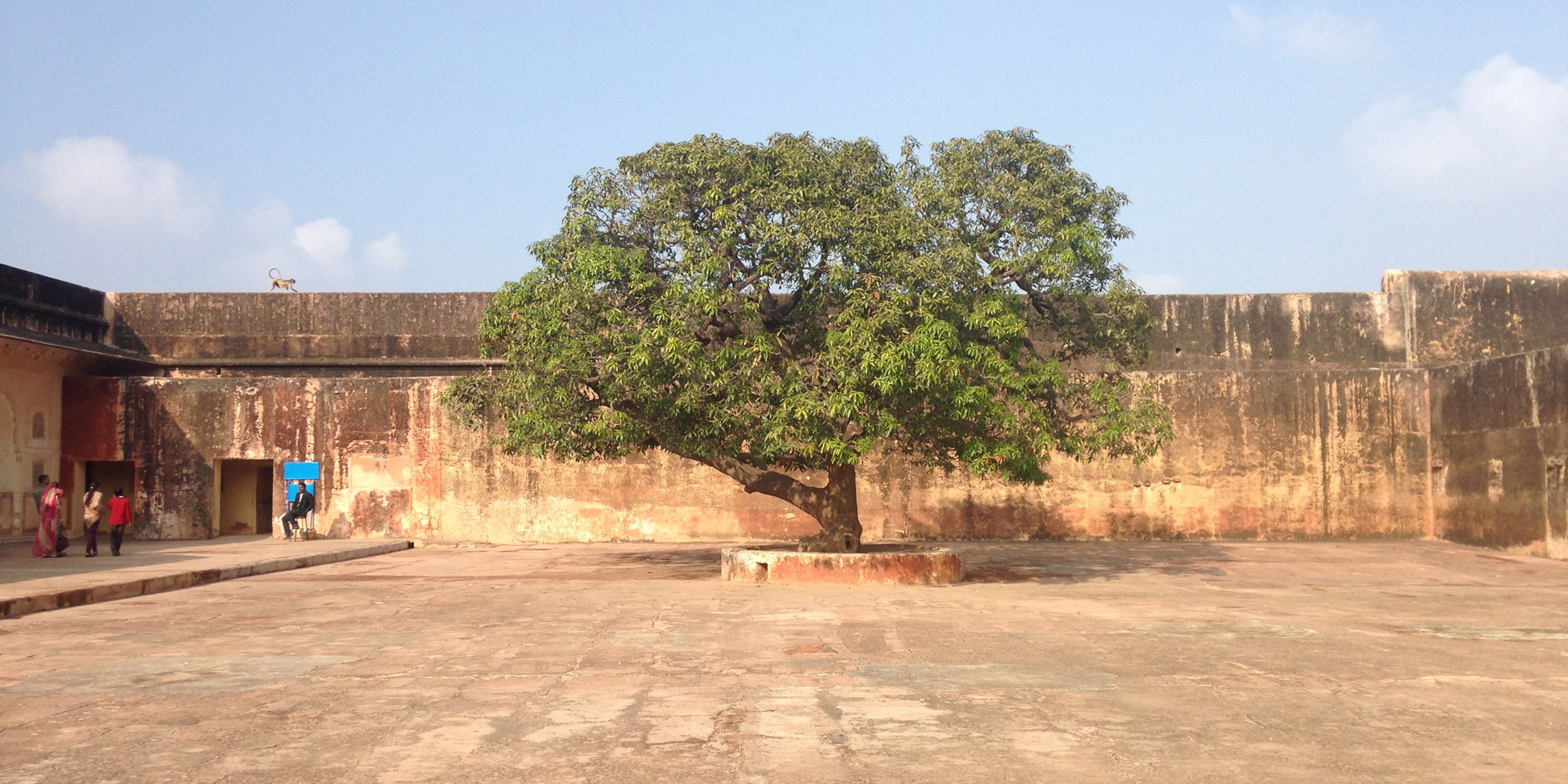 Michelle and I's train ride to Jaipur was surprisingly smooth. When we got off the train a young man came up and started talking with me in surprisingly good English. After chatting for a bit on the way to the exit he reveals that he's a tuktuk driver. Of course he is. He seems like a nice kid though so we let him drive us to our hotel. Once there he basically won't let us leave until we agree to hire him for a whole day to drive us around Jaipur. We eventually relent and tell him to meet us in front of the hotel at 11am the day after tomorrow. He introduces himself as "Sunny".

Our hotel is nice albeit a bit weird, all the employees give of this early 1900s British colonial vibe. For example they say "Good afternoon sir" when they see me, every single employee.

We pretty quickly pass out after arriving.

The next morning we take it easy, have a pretty fancy complimentary breakfast and relax. That afternoon we hire another tuktuk to drive us to the old walled city. Jaipur is known as the pink city… It wasn't especially pink apart from the old city which is REALLY red. Still not pink. We check out the city palace which is sort of where the maharajas used to live. It's a cool building and grounds but basically all Indian heritage sites pale in comparison to the Taj Mahal.

We spend the rest of the afternoon and evening wandering through the bazaars in the old town. Eventually we make our way to a store that specializes in camel leather. I pay a kings ransom (actually a totally good deal in dollars, but a small fortune in rupees) for a bag and Michelle buys some shoes.

We take another tuktuk to a restaurant called "Niro's" recommended to us by our hotel manager, they have three types of food: Continental, Indian and Chinese. It's fancy in the same way that all fancy restaurants are across Asia: super corny. I spend about $10 (super spendy day) on some Mac and cheese but it's totally worth it as it's the first cheese I've had in about 6 weeks.

The next day we had the hotel manager call a travel agent for us so we could get our next train tickets, the guy that showed up right away was nothing of the sort, instead he was a super shady guy who "knew" a travel agent.

When we were in Agra we asked the front desk guy to help us book a train ticket to Jaipur, he called up a travel agent and hooked it up fat, the day of. We figured we'd do the same thing here as our front desk guy has been super helpful. What he did was call this super shady dude who came and talked to us, and HE was going to talk to the travel agent for us. So one more guy who wants a cut. He said he would take care of it but that it was going to be very very difficult. My bullshit meter is on high alert continuously in India and this is an obvious ploy.

We meet Sunny in front of the hotel and have him drive us to three different forts. Jaipur has three forts above it in the mountains (for some reason) and they're all relatively close together, we visited them in reverse order of popularity and I liked each one progressively less. The first one offered some spectacular views of the city that don't translate too well to photographs. 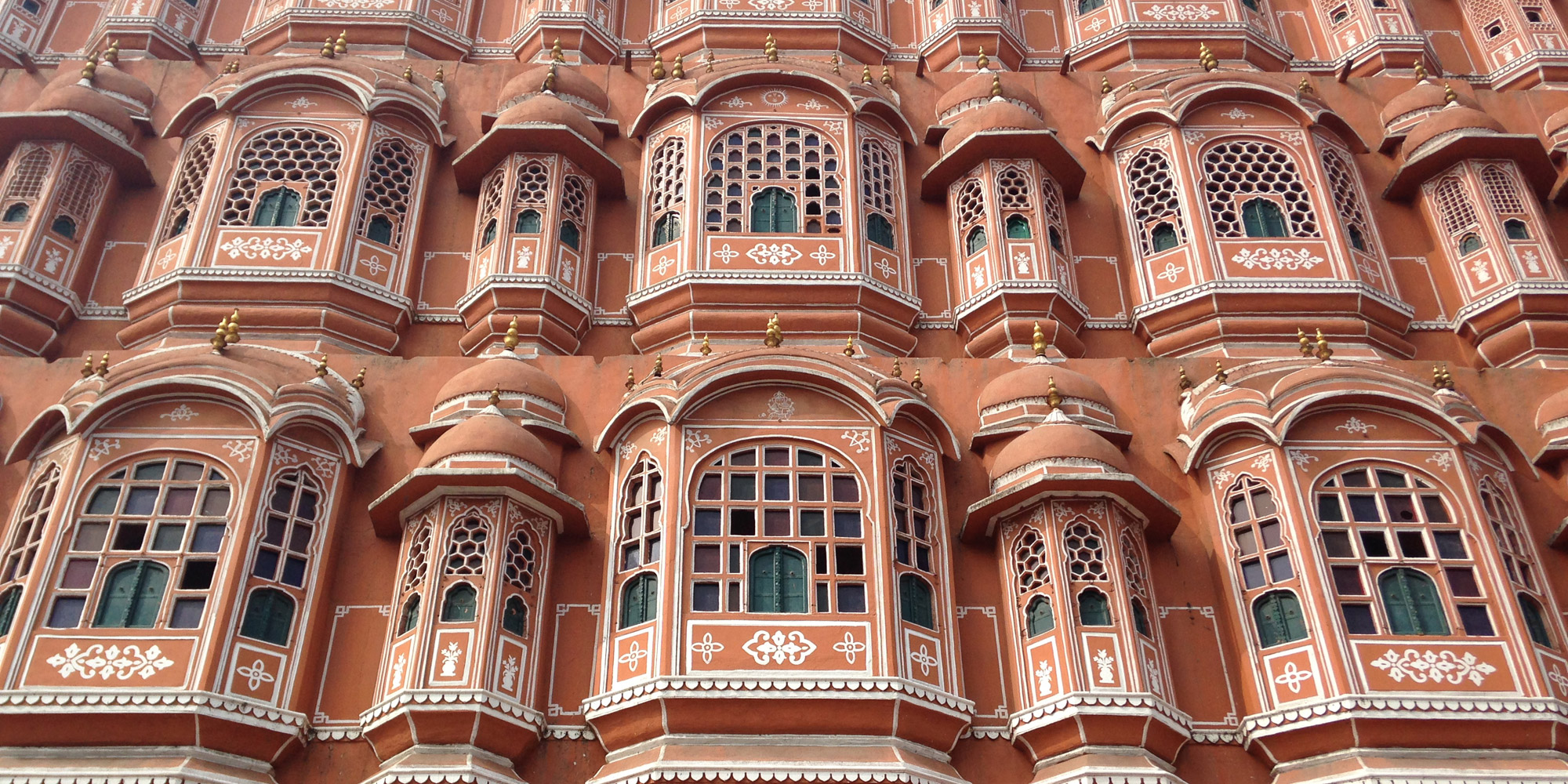 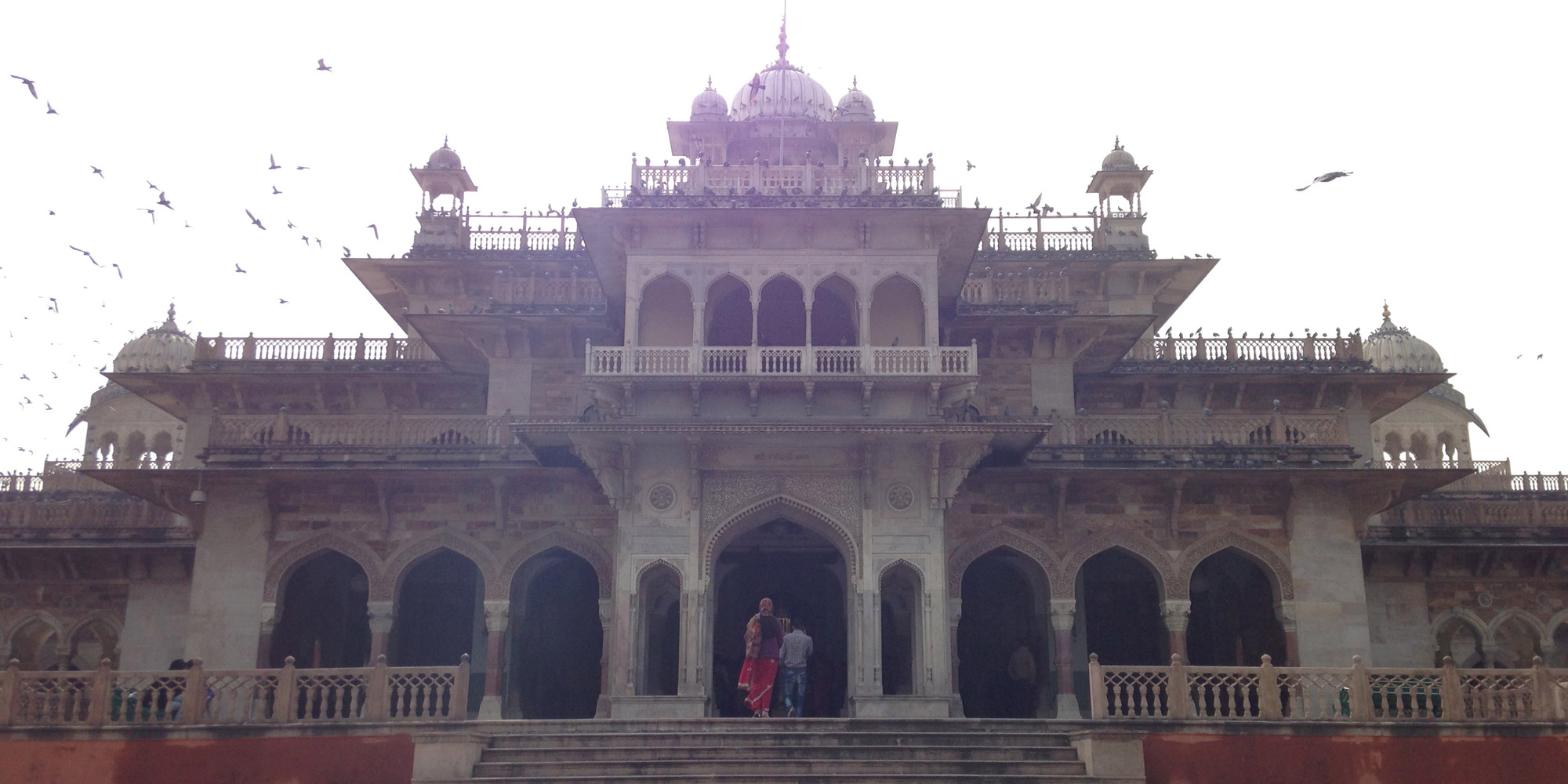 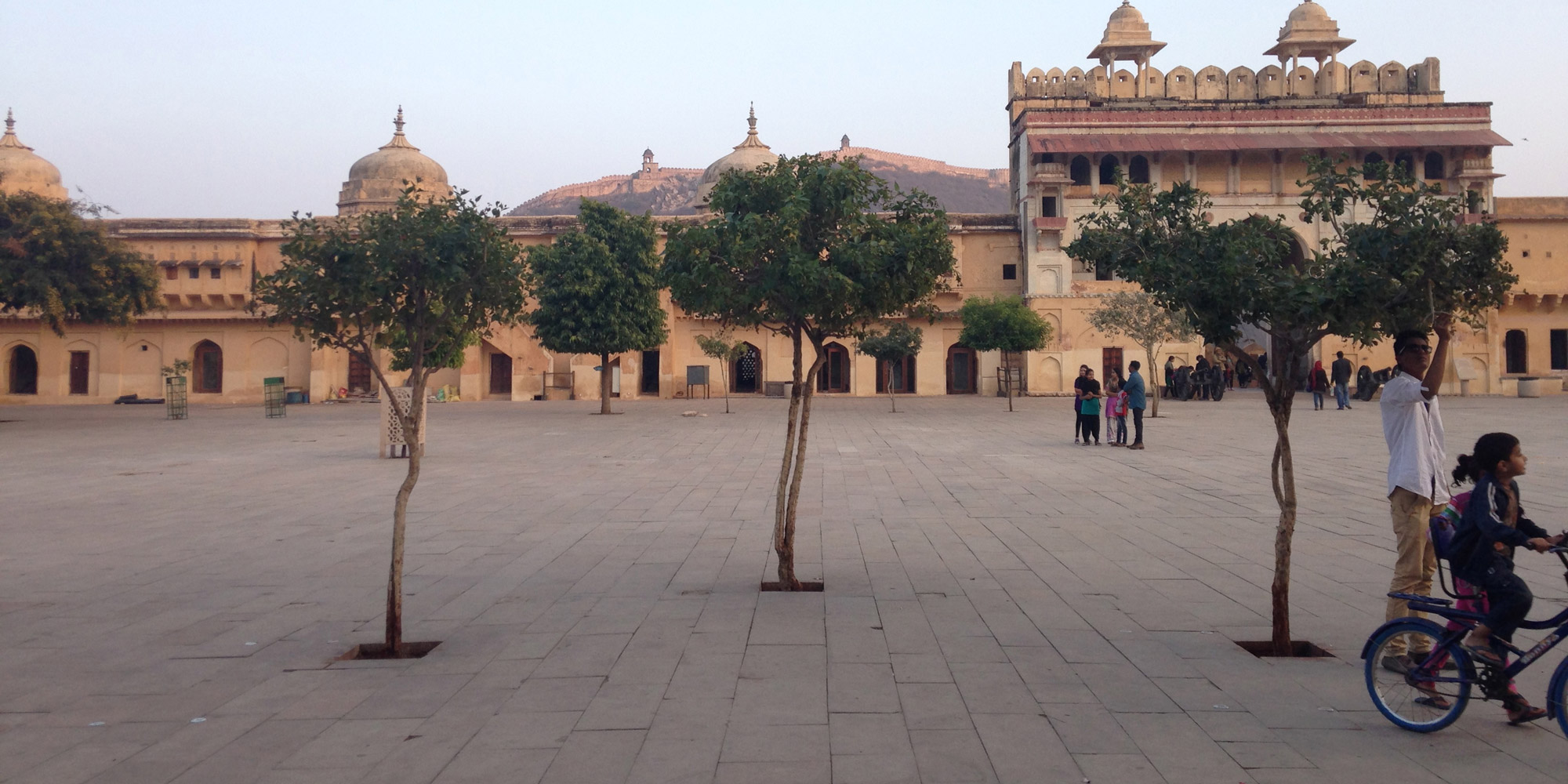 Between every fort Sunny would try to get us to go get a beer or visit his friends gem factory or something of the like. These are all common scams and we forcefully declined and he eventually relented. For some reason in Jaipur you continually get the feeling that people are trying to cheat you. Maybe India as a whole. It's made me extremely good at haggling though which is useful.

After we saw all three forts it was getting dark so we headed back to the hotel.

When we got back the train ticket guy was waiting for us with another weirdo guy who barely spoke any English. He complained that he had tried calling us 20x that day but we never responded (as he had our 17 year old Rickshaw drivers number and we were up in the mountains….sorry dude). He got us the ticket we wanted, but when he showed it to us the ticket was just a shitty printout with no names on it (our tickets from Agra had our names on it) these ones just say "passenger 1, passenger 2". We were like "Dude, these need to have our names on it" and he was like "It's okay, they are confirmed, you can trust me." (Sort of like when people start a sentence with "I'm not racist but…" when someone says "You can trust me" it really means "You absolutely can not trust me")Then he was trying to charge us a ridiculous amount for them. On the website it says they cost about 550 rupees each and he was trying to make us pay 3000 total for both with fees and we were like "fuck that for these shady tickets" so he instead just GAVE them to us and was like "take them to the train station in the morning and make sure your names are on them, if they are leave the money at the hotel." Which seems even shadier, that he would just trust us with them.

The next day we were a mild level of stressed as we were both convinced that our train tickets were bogus. We checked out a famous place called Lassiwalla and got the best sweet lassi I've had yet by far. (In case you don't know, Lassi is a delicious Indian Yogurt drink). We then went to a temple, which was of course closed, and then to some tombs for old maharajas. The tombs were cool but small, there was basically no one there and it was surprisingly quiet and out of the way for India, probably the most peaceful place we've visited yet.

Michelle and I went to the train station and got on our train with our likely fake tickets, the car was completely booked and much shittier even though it was the same class as our last train. We sat in our seats and after what seemed like 2 hours the ticket guy came by our car. He gave our nameless tickets a cursory glance and didn't even mention that we weren't in our assigned seats. I've never been so glad to see Indian laziness and general job shittiness as I was then.

We were off to Jodhpur.

We were met at the train station by a tiny Nepalese man who was there to lead us to the hotel (it's about a 5 minute walk). The area around the train station is absolutely shitty, so I'm a bit worried. We arrive at the hotel and it's equally as shitty, but the rooms not terrible and it has a balcony (plus it's about $10 a night total so we can't really complain). There's a rooftop restaurant, where we go and I have beans on toast which I haven't eaten since I lived in England. It takes me back.

The following day we went to the train ticket office across the street to get our overnight train tickets to Delhi. Luckily they have some reserved beds for tourists in 2A of which we snatched up the last two. Then we headed to yet again another fort. Jodhpur only has one fort and it's way better than all of Jaipurs' forts combined. It towers over the city on a huge cliff. Once we got in we realized it was actually organized! Like there's a path through it! All the forts in Jaipur are just totally open, which is cool but can be boring after you see your 50th identical room. The Jodhpur fort also offers free audio tours which we took advantage of. Between the headsets and the camera passes dangling from our wrists Michelle and I looked like proper tourists. 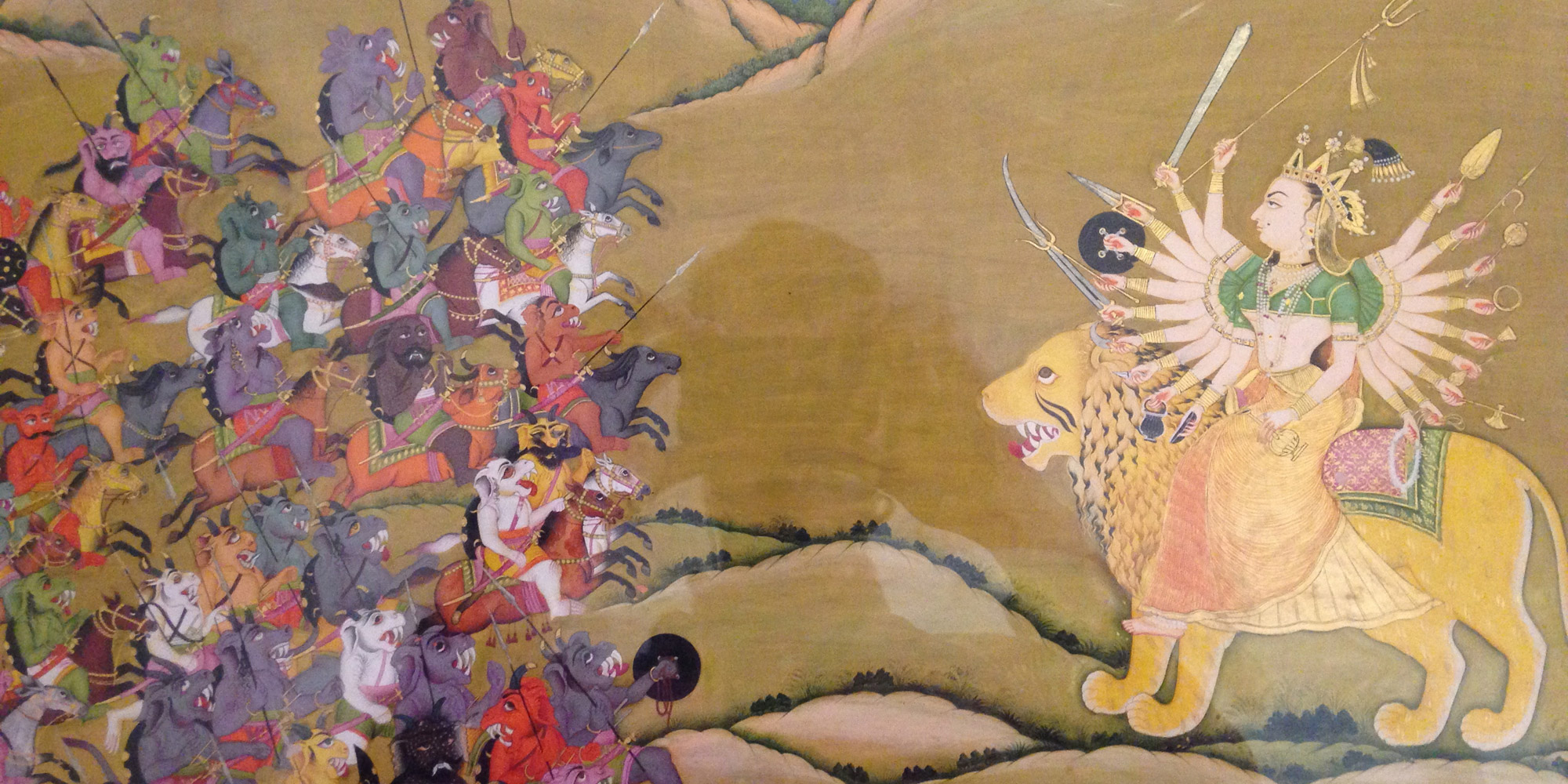 After we saw the whole of the palace we walked along the wall and took in the city from above. From there we could see a clock tower with tons of people at it; we had no idea what it was but we decided to head there next. 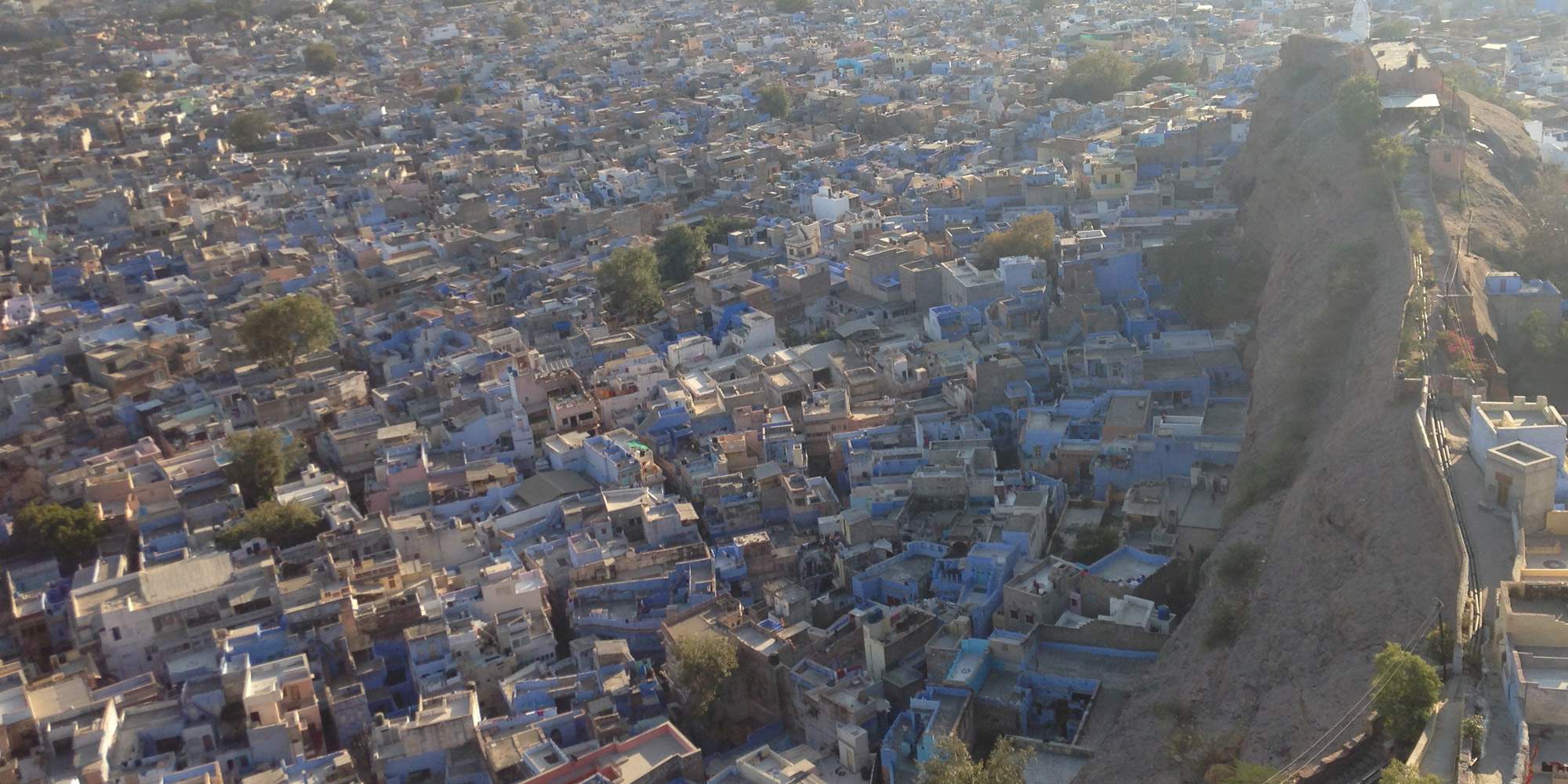 When we arrived we stopped at a little shop and bought some Black Horse cola that my friend Grant told me about. It's made in Jodhpur and is only available here. It was pretty tasty, like fresher coke, but it hilariously comes in recycled bottles, mine was covered in scratches.

We walked to the main gates leading to the clock tower and I hear Michelle call my name from behind me. She's stopped at a crappy looking food stall and I can't imagine why. "I think I read about this online" (thank god I have Michelle with me, she's been doing way more research for places we should visit). Turns out we are at the stall of the infamous "Egg Man". In the 90s Lonely Planet discovered his tiny stall (it really is just a hot plate with a stack of about 1000 eggs next to it) and his popularity exploded. He only makes omelette sandwiches, the most famous of which is the masala cheese, which Michelle got. I can honestly say it was the single tastiest egg dish I've ever eaten.

We wandered around the bazaars a bit after we were sated and then headed back to the hotel.

The next day we caught a car out to the Thar desert, which is a huge desert that reaches all the way into Pakistan. From there we met our guide who loaded us onto two camels. 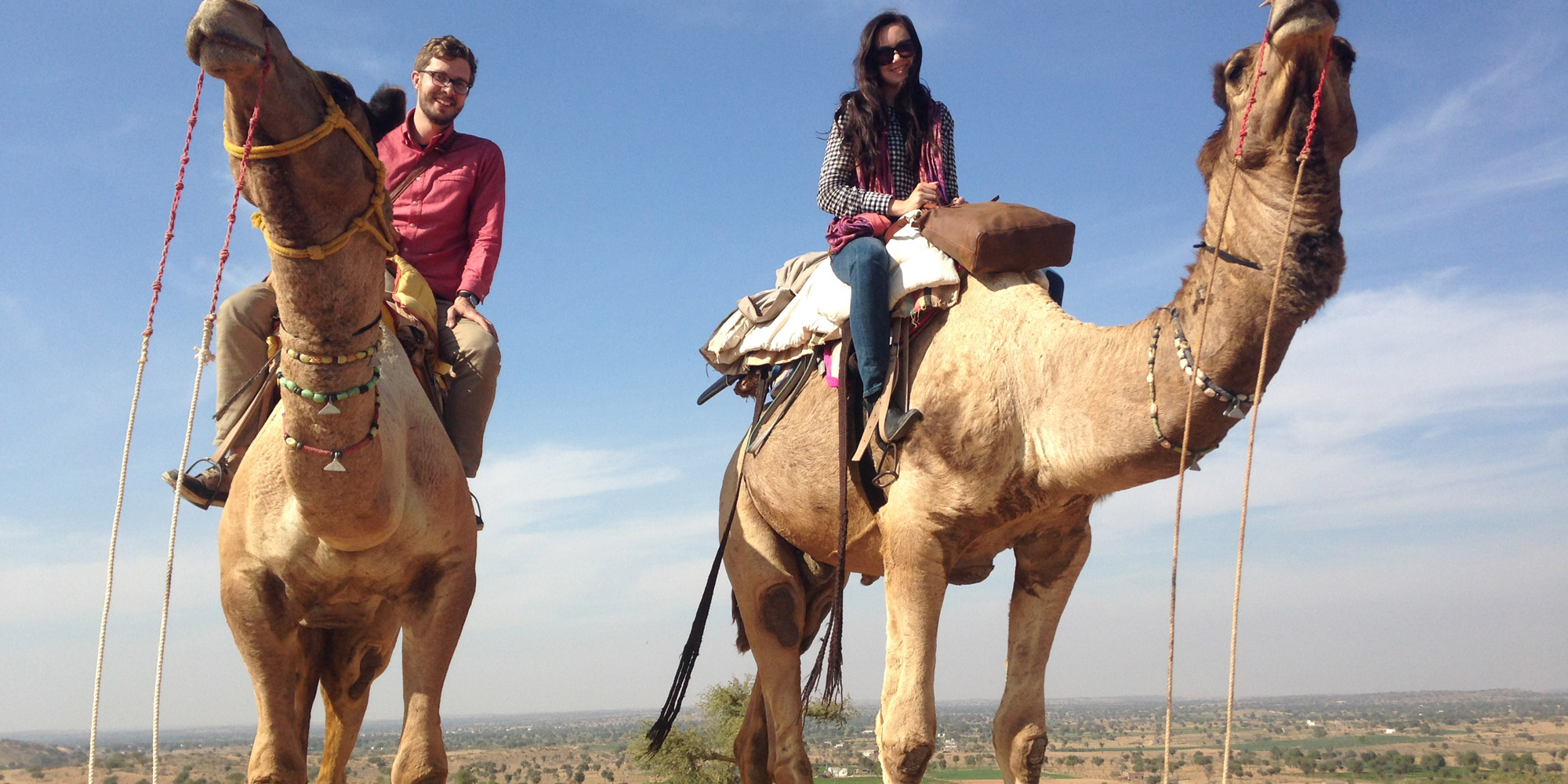 When we signed up for a camel ride through the desert I anticipated we'd get to ride the camels for about 20 minutes. I couldn't have been more wrong; in total we were on them for about six hours! Our guide took us to his house out in the middle of the desert where he and his wife made us lunch and chai. The lunch was a delicious curry / chapati / rice / veg mix. Every time I cleared my plate he filled it up again. By the time I got up the nerve to tell him "no more, I'm full." I had eaten about 4 plates worth and 8 chapatis. We walked around his land and house a bit (and met his goats) before heading back onto the camels for another 3 or 4 hours and then drove back into town. 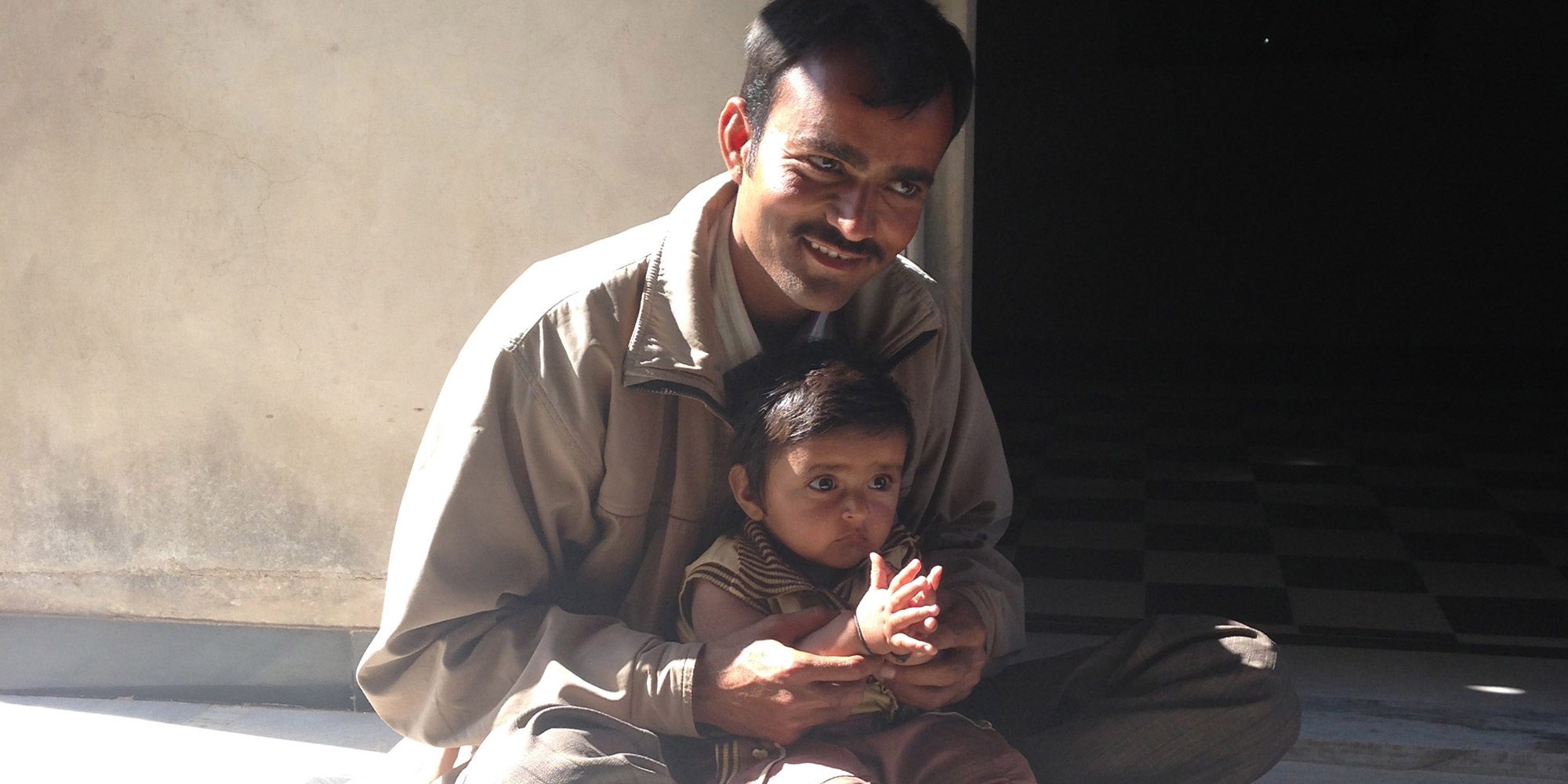 Riding a camel through the desert for 6 hours is surprisingly exhausting (maybe not that surprising) so Michelle and I were having trouble both sitting down (my first experience with saddle soreness) and staying awake so we called it an early night. Luckily our train to Delhi was that evening so we headed to the train station and waited for our train (which was 2 hours late). We met up with Michelle's brothers friends at the train station (who were also headed to Delhi, though we never saw them again after the train). Eventually we made it to hour beds and collapsed into them. 10 hours later we woke up in Delhi.